Over the weekend I celebrated my first Pride in London with my beloved friend, Callum.

We started the day at his place, sipping glasses of buck fizz and lining our stomachs with a bacon butty (which he prepared). It was deeelish!

We took the train from Greenwich to Piccadilly, our bags packed with more bubbles, gin, plastic cups and rainbow face paint. Yasss, these Kweens were set!

While we were waiting for our train though, Callum mentioned how he was asked in the week leading up to the event, if he thought ‘Pride in London’ was still necessary?

Allow me to answer that for my beautiful darling friend…

-While Cal was in the middle of explaining this, he also stopped and said to me “Can you see the kind of ‘looks’ I’m getting? Don’t they know, it’s Pride?”

Now, not that any human could ever or deserves to ever, take away the light bursting inside of my gorgeous friend, but it really pissed me off that today of all days, there were still some people willing to make him feel not worthy or accepted (let alone every day of his god damn life!).

Eventually we got on the train and we were stoked to find it filled with people wearing exactly what we were wearing; boys in short shorts, girls with rainbows on their faces, glitter everywhere. Any thought of the small minded who tried to quash our spirits were themselves, quashed.

-When we got to the parade, it was delayed due to anti-trans protestors. These people not only laid down on the ground in front of the march but were still allowed to walk the parade first (police escorting them) holding signs, banners and flyers filled with such awful, hateful messages about transsexuals. It was such an ugly thing to see, especially when everyone who was standing on the streets were there for the exact opposite reason. So, we booed them. We booed the hell out of them!!

-Once the parade finally started, my heart filled with joy and my eyes welled up (they always do, no matter where I’m watching it, Sydney, Brighton). I just love the feeling of when the parade begins; it symbolizing another year of fighting and resisting, yet another chance to shout love and light from the rooftops. It was amazing seeing these humans so happy and so celebrated. Admiration poured from every street corner and scaffolding but I couldn’t help also noticing the other signs that stated that being ‘gay’ was still illegal in 72 countries. 72!

So, is Pride in London still necessary? ABSO-FUCKING-LUTLEY!!!

Even if we get to a world where none of the above exists, there will always be a bunch of brave, fearless, strong men and women, who made it a little easier for that other boy to come out to his parents or that other girl to tell her best friend that she likes girls. I imean, that needs to be celebrated not just at Pride but all the freaking time, right?!!

But honey seriously, besides these slight attempts to bring us down, nothing was going to damper our day! We sang, we danced, we hugged, we held hands, we laughed; it was a magical, perfect day. A day simply about love and loving each other.

By surprise, I also saw my other friend Tony strutting past. This made me (once again) explode with pride and strangely also made me feel right at home. Wow, how could I have only been back in London for just over a year and already recognized a familiar face, not just in the crowd, but in the parade!? Tony shouted out my name and gave me a high-five, my eyes got glassy again, it was so special.

Actually, there were many other things that gave me ‘all the feels’.

-Parents parading with their young children (straight and gay), I swear this is something I will do with my kids too. I also feel like if my son ever told me he was ‘straight’ I’d be most disappointed. Ha!

-There were different cultures and religions also parading their gay stuff with utter sass and fun; it was super powerful.

The only thing that is ‘unnecessary’ about Pride in London is the amount of glitter you will continue to find on your body, in your hair, in your bathroom and in your bed afterwards; no matter how many times you have showered or attempted to clean it up. It’s like a fucking unicorn has shat everywhere. And the cheeky train-toilet-vomit one may encounter on the way back home. Whoops!

Still, I would do it all over again in a heartbeat.

I grew up in a house where my mum would always invite her gay friends around for dinner parties; my Italian dad would sit at the table and speak to them like he was down at the pub with his own mates. My point is, maybe if everyone had the chance to grow up with ‘gay people’ being treated just like ‘people’, maybe no one would ever question if it was necessary.

So, is Gay Pride still necessary? Yasss Kween! And I cannot wait till 2019. Maybe I’ll be in the parade next time too!!

“There is nothing stronger than a broken woman who has rebuilt herself.”

“Anger is never constructive. Laughter is not our medicine. Stories hold our cure.”

No matter what your view is on gender dysphoria, feminism, mental health, homosexuality or even Donald Trump, I highly doubt you will get to the end of this comedy special (if you can call it that) and feel nothing.

Gadsby is changing the world of comedy with her story. When I think about her now, my heart fills with joy, sadness and hope, all at the same time.

If there’s one thing you watch this weekend, make it be ‘Hannah Gadsby’s Nanette’.

I am not a victim. My story has value. To be rendered powerless does not destroy your humanity. Your resilience is your humanity. To yield and not break that is incredible strength. Diversity is strength. Difference is a teacher. Fear difference you learn nothing.@Hannahgadsby

“Boys will be boys and women will be careful, so can we just get men to be men?”

“You’d still get a grown ass president denying any wrong doing though.”

Just watched Hannah Gadsby's Nanette on Netflix. Wow. Amazing and brilliant and incredible. I laughed and I cried. I’m still emotional thinking about it. Brave and vital and beautiful. Oh my God. Thank you @Hannahgadsby

“I don’t feel comfortable in a small town, I get a bit tense, mainly because I’m this situation.”

January Jones just tweeted a pic of you @Hannahgadsby and @RWitherspoon says she’s writing Nanette quotes in her journal. Shit’s getting crazy girl! 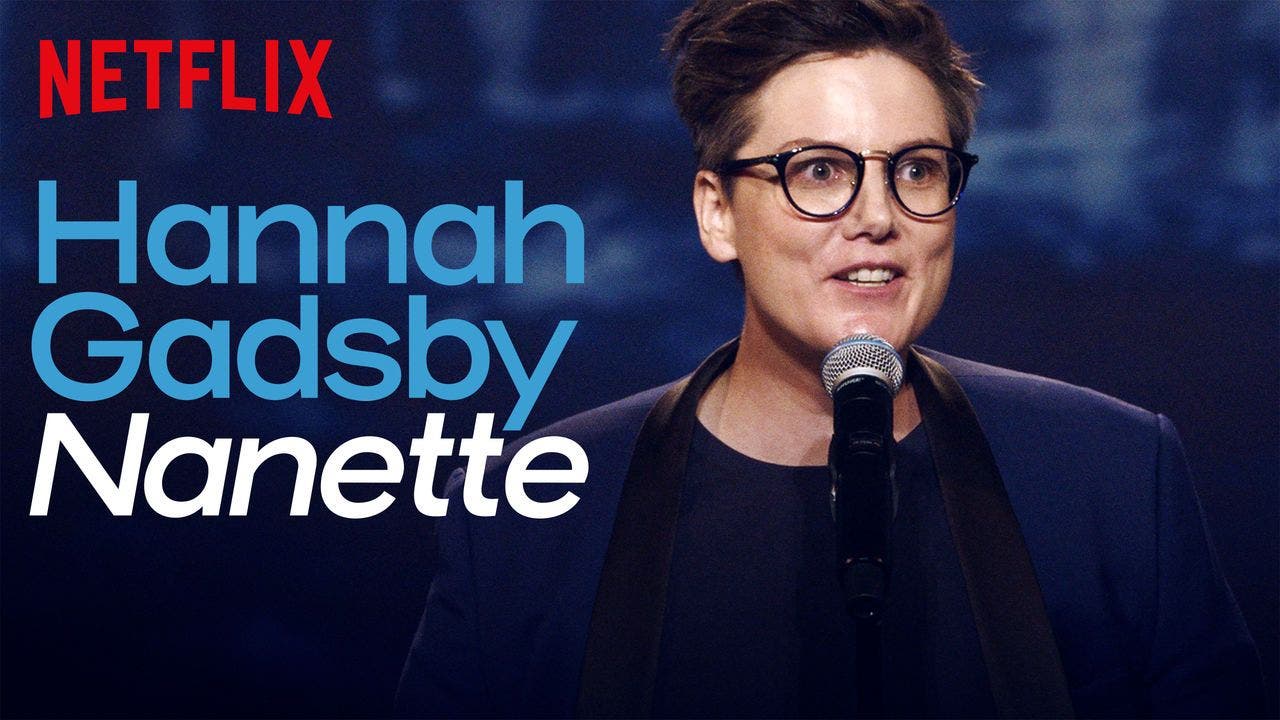