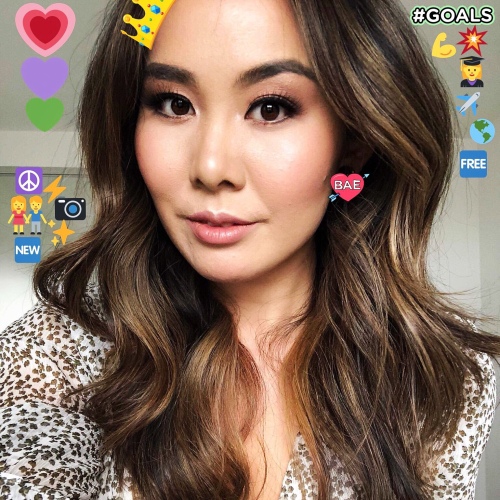 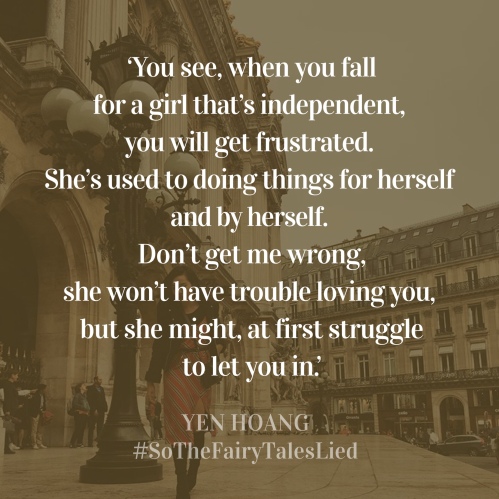 Hi, I’m Yen. I am a girl that’s super independent. I grew up believing in my strength, was taught to think that I am bold, that my words carry weight and can help change the world. I learnt that I am a force to be reckoned with when I’m standing on my own two feet, and when I must decide, for myself, I know what I want.

Throughout my early 20s, I had everything: a semi-successful startup brewing, found the greatest group of people I still call my best friends today, moved to the other side of the world, travelled alone and graduated in the top two percentile of my university. Yep, all before 22.

I always knew I was super independent, it probably came with being the eldest sibling and a Virgo (think Beyoncé, Jada Pinkett-Smith, Sheryl Sandberg: just to name drop a few). 😉

I was used to walking fast, spending my own money and opening my own doors. I learnt to trust myself and knew who I was through falling down and picking myself back up. I found my niche in the world, paving my own way, presenting my own smile and sense of self to whoever I met. I wasn’t used to balancing myself with another person. I wasn’t used to needing someone, or allowing anyone to help.

My independence definitely contributed to the destruction of my relationships in my early 20s too. I drove men crazy because I didn’t let them do everything for me. I didn’t let them cater to my every need. I refused to let them pay for every date.

I sometimes wouldn’t let them be the manly-man, the savior, the strong suitor that they so desperately wanted to be for me. It’s wasn’t on purpose; it’s just because I was used to being my own savior. Someone even told me to ‘pretend and be a little less independent, just so they can feel you need them’.

Somehow, something still didn’t feel right. And along the way, I lost my independence: I became that friend who disappeared off the face of the earth because she got a boyfriend. But I fell into this trap, of believing I had to dumb myself down just to make a boy feel better about himself.

My last breakup reminded me how much I needed to put myself first again and regain everything I knew about being independent. Although that breakup shattered my world, it was a sign that I wasn’t meant to be in a relationship with anyone else but myself. 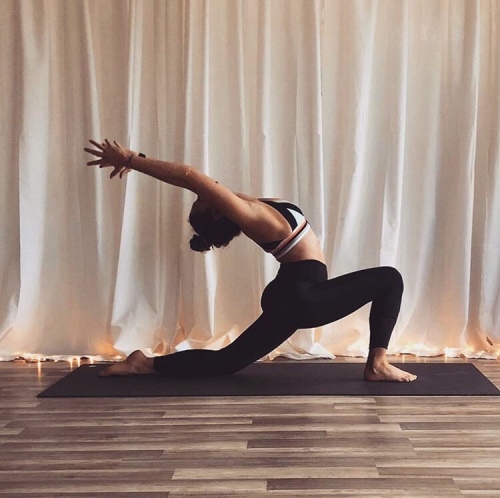 Maybe it was a time for me to fix myself and change. Appreciate myself more and to never make the same mistake. To achieve more goals and more importantly find happiness. To hopefully one day understand, that I’ll attract the right things when I have a sense of who I am.

I had spontaneously decided to accept a job in London (the other side of the world) and pack up and leave within weeks. I had lived in London back in 2011 while studying there and had always called it my ‘home away from home’, so when the offer came through I couldn’t reject it. I called my best friend and told her I was coming, and recalled saying “I have nothing to lose”. I didn’t make plans to come home, or let alone have a plan? I was ready to accept whatever it was that the universe had installed. I felt so free. 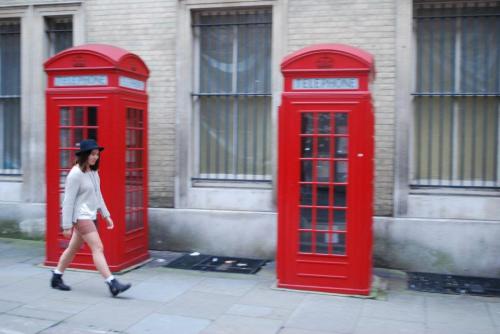 The week my visa appointment with the UK consulate got booked: I met a guy who I never imagined would mean so much to me today. You see, I was so focused on my life that I was completely blind-sided; a relationship was the last thing I was looking for. On our second date, I had no choice but to tell him I was leaving the country. I felt like I owed this to him and was super nervous delivering the update. That’s when I knew, I really liked him.

I asked for answers “Why throw me a bone now universe? I am about to go on an adventure of a lifetime! Do you want me to stay in Melbourne?” I even went to church and a temple to find clarity. I have never felt so vulnerable in my life.

I still left for London and to my understanding we weren’t official. But the distance didn’t change how we both felt about each other. Sure the different time zones were hard but we made it work. Last minute, I booked a flight home so I could surprise this guy on his birthday.

I was super super nervous, I mean, who was I to him to do that? We weren’t even official or anything exclusive! I knew I was taking a big chance. I guess that’s the whole issue with being independent yet a hopeless romantic too. Naturally, we then agreed to a long distance relationship because he acknowledged my dreams and supported it no matter how tough it was going to be.

You see, when you fall for a girl that’s independent, you will get frustrated. She’s used to doing things for herself and by herself. She’s used to following her own rules, making her own decisions, being selfish with her time. It will take a bit for her to get used to putting someone else first, to moulding her life to shape both yours and hers together. Don’t get me wrong, she won’t have trouble loving you, but she might, at first struggle to let you in. 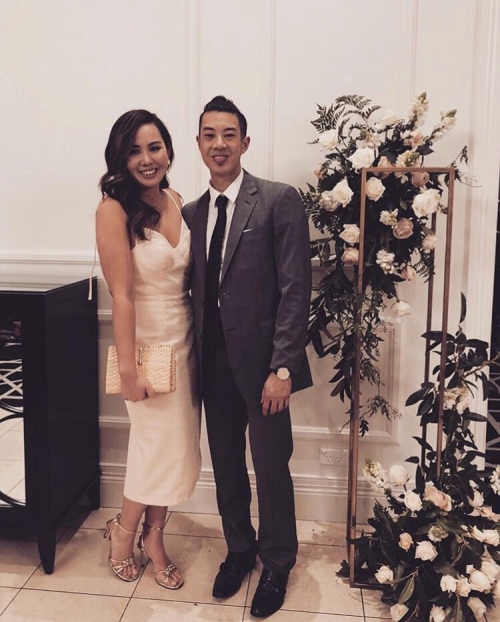 A long distance relationship ended up being the best thing for me. I learnt to prioritise a relationship; scheduling in calls with confusing time differences, improving communication skills and letting someone into my life, knowing I can still continually work on myself.

I learnt to let the small things go, had to invest a lot of trust in someone, believe that not all guys are bad (something that doesn’t come easy for me), to compromise and have patience, extreme patience. And finally, I learnt that when time and luck crossed paths the universe would find me a guy who will fall in love with my driven, spontaneous, independent character. 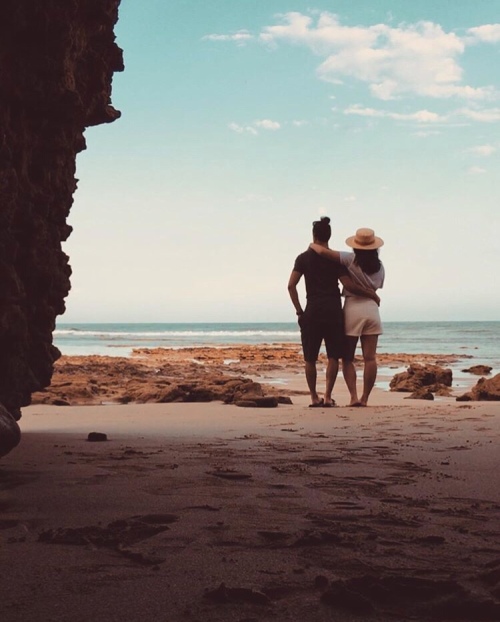 Go travel the world, battle your demons, set up a business, find people who value your heart and yours will attract. Don’t apologise for working hard, for having goals and being independent: we need more girls like this.

When the right person comes along, they will support you unconditionally and when you do come across that person, know that you deserve them.

I hope you love yourself enough to recognise the things you don’t like about your life, and I hope you find the courage to change them. And I hope somewhere out of the unexpected, a person comes along who will love and support you on your journey too.

Yen started her career in public relations with aspirations to work in the fashion industry, she became curious with e-commerce and technology and evolved her career to where she is now. Awarded Australian Best Young Marketing Talent (2016) for spearheading numerous innovations in her field, she is a passionate marketer with an entrepreneurial edge focused on overachieving outcomes. Competitive at heart, she never wanted to settle for just a nine-to-five job and saw an opportunity start her own business while still working a full-time job. People often mistaken Yen to be quite timid on first impression, but little do they know that she enjoys confrontation, is super opinionated and will definitely shut down dickhead behaviour (if she sees it). Her upbringing has been quite colourful (a story for another time) but as a result she is now super passionate about raising diversity issues (in every form) and empowering young girls to chase their dreams through running mentorship programs and teaching at a university outside of her side hustles.