I was always going to be famous. It was like, in my DNA. I got a taste of fame early on when I was the star of a local Telethon: the focus of a 24 hour live TV event to raise money for a children’s hospital. It was awesome! So I thought I’d better set about becoming famous for reals.

I studied journalism, television presenting and radio announcing. I decided I wanted to read the 6 o’clock news on the telly and I also wanted to read those bits on the TV after the ads but before the show: “This program, brought to you by Toyota!” You know the ones.

At uni I discovered radio was way better than television; less call for hair and makeup, more opportunity for ridiculousness, and I did it!! I achieved a small amount of fame for a little while. Not earth-shattering-Cate-Blanchett-style-fame, but people recognised me on the street, pubs let me jump the queue and shops gave me discounts. It was a super fun time!

Now, it was somewhere around this point that I started to royally fuck things up.

I jumped ship from my radio station, leaving my mediocre fame; seduced by the lights and the promise of more money on the other side of the country. Not long after that another company came along and promised me more money and more fame (which of course I was totally expecting), so I ran to them with open arms, just as the media company I was leaving was really transforming.

I never really hit my stride and I never really found my niche with the other company. I missed my opportunity. Slowly my star faded and I just became a worker bee, consigned to an irrelevant on-air shift that no one seemed to listen to. I took on more off-air roles that just consumed both me and my passion for radio. Where was my promised fame? Where was my name in lights? How did I mess this up so much? Was I really destined for the banal, the humdrum? Why wasn’t I reading the 6 o’clock news? How come bouncers weren’t letting me skip the line at the pub anymore? 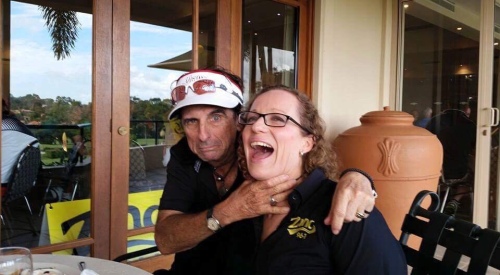 I found myself angry and sad, overworked and underappreciated. I realised this wasn’t super fun anymore, but I had a mortgage now. Disillusionment set in with a thwack! Here I was, on the wrong side of the country, not rich and famous, doing a job that I now hated. How the hell did I get here? I’ll tell you: by my own bad decisions. I didn’t know they were bad decisions at the time but there’s not a single other person on this planet that I can blame for where I ended up. And trust me, I tried.

Then, I got made redundant; worst fear realised. “They hate me, I was crap at my job and they wanted me out” were the constant thoughts running through my head. I had never felt so low, so much like a disappointment. It was like all this hard work I had done was for nothing. And I still had that damn mortgage to pay.

But, sometimes you fear the worst, only to find out the worst isn’t really that bad. Actually, it’s nowhere close to what you were worried about.

No, these turns of events didn’t leave me living in the gutter, never getting out my pajamas or currently typing this on a shared computer at the library. I reincarnated myself. I’m currently living my life post radio, and guess what I do for a job? I read those bits on the TV after the ads but before the show: “This program, brought to you by Toyota!”. You know the ones.

These days I work from home. I run my own successful voice-over business. I get paid stupid amounts of money to read scripts that are only 30 seconds long. I’m the girl you hear during most of the ad breaks; sometimes selling you a car, sometimes convincing you to take a holiday. It doesn’t suck.

Life didn’t turn out the way I expected, and I have decided I’ll have to turn to reality TV to achieve my much needed fame, but it’s not all bad news.

I failed at my chosen career but I survived. Then again, did I fail? Or did I just get lucky?

Belinda Cotton is a professional voice-over artist who likes to drink beer, hang out with friends, listen to live music and travel. Preferably all four at the same time. She’d also like to have a dog and two cats, but so far no luck.